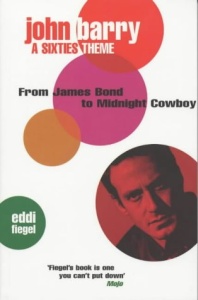 John Barry has been called the most important popular British composer of the 20th century.

Winner of five Oscars, and composer of the James Bond films, "Born Free", "The Ipcress File", "Midnight Cowboy", "Out of Africa" and "Dances with Wolves", as well as classic TV themes such as the "Persuaders", he has become a cultural icon and an inspiration to countless musicians.

Throughout the 1960s Barry was at the heart of swinging London, with two flats in Chelsea, an E-type Jag and friends like Michael Caine, David Bailey and Peter Sellers.

Jane Birkin was his wife and his "Goldfinger" soundtrack was second only to the Beatles in the US.

His career reflects the evolution of post-war British music from big band to rock and roll and the birth of pop, and his beginnings in the film world coincided with the renaissance of British cinema.

Written with the cooperation of John Barry, and including insights from friends, "John Barry - A Sixties Theme" is a recreation of a period when London was the international focus for music and film.

And against a backdrop of enormous social change, it reveals how John Barry came to write his music and why.