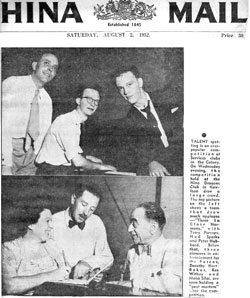 My husband Alan and I are great fans of Matt’s. Alan’s uncle Neddy Sparkes and Matt were best of friends when Neddy (Robert Sparkes) and Matt, then Terry Parsons was in the Royal Tank Regiment in Hong Kong together. Neddy was in the in the Royal Artillery.

Both sang in the NAFFI and and both eventually were stopped from taking part in singing competitions. Matt in the BBC documentary The Man With The Golden Voice says “I was banned from competing because I always won, they said it was because my best friend was master of ceremonies, so it was probably true”, jokingly. “Trouble was when I was MC Neddy won”. The reason he won and this comes from Neddy was he was the best.

Any way we have some pictures of Matt and Neddy in Hong Kong together.