Other John Barry themes were conducted by Nicholas Dodd. 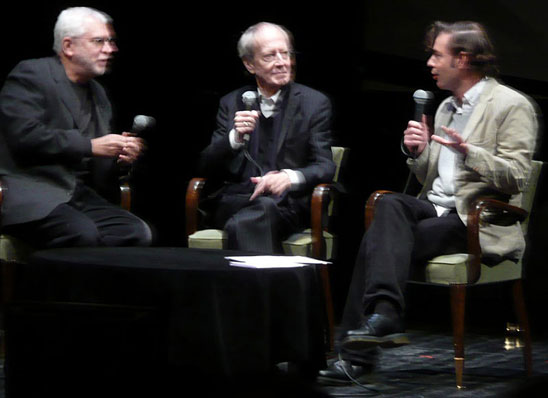 A report on John Barry's musical conference held at Auxerre Theatre on Nov 16. 2007

After a 2 hours drive from Paris, we finally arrived at Auxerre, a charming medieval village located in the famous Burgundy wine region, where we parked the car along the Yonne river. It was 3:30 pm, one hour ahead of the planned opening of the John Barry musical conference organized by the Auxerre international festival of music and cinema 2007 at the local theatre on this Nov 16 Friday.

After a short walk, we easily found Rue Joubert, a narrow street with ancient houses and shops, many of which had some James Bond heroes on display in a funny way or at least a Bond film poster. It led us to Esplanade Francois Mitterrand where it was a bit of shock finding here a typical 60's white concrete building. The conference had been announced as a free admission event with an unconfirmed 4:30 pm schedule and no registration process, for a theatre capacity of 550 seats, so it was a must to be there early enough. We came into the theatre but were told by a Festival staff member that we had to wait outside, since only the registered Festival attendees could enter at this time. Luckily it was a sunny afternoon though the outside temperature was only 5 degrees.

After many press specialists came in with cameras and video recorders, it was 4 pm when the general audience right front door finally opened. We would still be standing for another hour in the theatre hall, since John Barry didn't arrive before 5 pm, and then at last we could be seated in the theatre back rows, while the official invitees filled the front ones.

Stephane Lerouge, a famous film music collection director for the french Universal Music Group, opened the seance to praise the coming of one of the rarest appearing score composer, John Barry, and proposed a short 50 seconds video of The Persuaders main titles as an introducing welcome. He then announced the planned french translator could not attend because of the current French trains strike, so he had to find a last minute replacement within the Festival attendees, so was glad to welcome the Oscar film director Bob Swaim in an unexpected role.

Stephane then asked the first question: what are the advantages for today's score composers to express themselves through cinema?

John answered it's always the same thing when meeting a director and a producer: they think they are auditioning you when in fact you audition them. Usually it's really within the first 20 minutes of watching rushes that you know if it will work or not.

Next question from Stephane he says has been asked a thousand times before, but can't be avoided: how would you characterize the established John Barry sound of Bond films?

John said these were the simplest movies to do because of the format with the villain, the girl and the hero. It was really an enjoyable thing to do without any intellectual depth to care about and he worked on 11 first films with many directors, it was a total fun, Cubby was a charming producer and Saltzman, hmm.

Stephane tells he has selected a film extract to illustrate the sound of Bond: it's the Death Of Fiona scene from Thunderball.

John then said after doing 11 films, which were basically always the same thing, he told the producers they had to find another composer.

Stephane had asked John before the session which Bond scene he would like being showed, and John selected the Ski Chase from OHMSS because of the introduction of the Moog synthetizer and he was very interested about mixing it with the orchestra.

Stephane now asks Bob which factors decided him to have his 1988 film Masquerade scored by John.

Bob tells he had watched Richard Marquand's Jagged Edge and was stunned by the jazzy score, so asking who composed it because it was exactly the kind of sound he wanted for his thriller. He then asked MGM studio to hire John at any cost. However a surprise occurred when he listened to the written score since it wasn't jazzy at all, John having focused the score on the love story instead of the thriller action. And Bob said doing so, John really added a new dimension to the film.

Stephane now talks about the 60's when John worked with several directors coming from the commercials such as Richard Lester so he asks John what did these people bring to the British cinema?

John tells the essential new thing was the speed of cutting, because the then current film trend was a very slow cut, and people doing commercials had to be speedy to say a lot within 30 seconds. Between film projects, most young directors were doing television advertising. Bob asks John how the fast cut influenced his film music. John says he found there was a need to do a counterpoint, so that the music does not follow what's happening on the screen, but shows the emotional part of it.

Stephane proposes to watch an extract from The Knack, Cannes 1965 Palme d'or award, which was the first collaboration between John and Richard Lester, including a kind of waltz jazz with chorus.

Then Stephane remarks Lester was known to play the clarinet and asks John about the relations with directors having some musical knowledge.John answers Lester was a very bad player of clarinet so it was better for him being a movie director. He says some directors have a little musical knowledge but think they have a lot so then it's a pain in you know what. But Lester had a great knowledge of music and told John had done what he himself would never have for The Knack, but it worked. John concludes the 60's were the first revival of the British people since Churchill died with the new wave of pop music.

Stephane says John was really representing british young music for cinema sound, but at the same time became involved with a totally contrasted style of music, now demonstrated on screen by Eleanor's arrival scene from The Lion in Winter.

Stephane asks John if he could have imagined, while playing with the JB7, to later score such a historical drama and which issues he met when writing this music?

John says what is wonderful with costume dramas is you can study the period and research the music. He said Peter O'Toole had a huge success with Lawrence of Arabia but then played in very bad films, so The Lion in Winter was a great comeback for him, mainly because Kathryn Hepburn, who was a strong lady pushed Peter into the right direction.

Stephane announces that tomorrow's concert will include the theme written for Mary Queen of Scots, and feels that John wrote music for historical films with a double view: one is inside the period and another is outside as seen from today.

John replies he has to write in a kind of classic style for the period but at the same time links it to the contemporary audience, so he tries to find arranging tricks with the orchestra to get the binding that works.

Stephane moves the discussion forward with a question about Midnight Cowboy: how did the title song influence the music?

John tells the director John Schlesinger had selected the song to be used as a theme for the film. In contrast, he wrote the harmonica sad repetitive music as a second theme. Schesinger was an extraordinary director with high musical knowledge, and he was also directing operas.

To show the transition between the two themes, Stephane proposes to watch the final scene from Midnight Cowboy.

Stephane now asks Nicholas Dodd, who will conduct tomorrow's concert, to stand up and answer the following question:

how would he situate John in the context of british film popular music history?

Nicholas answers John is in the psyche of every contemporary british composer because his melodies are so well known.

Next question is: when you were a kid, which memories do you have of John's music?

Nicholas says he was first touched by the amazing melodies from the Bond songs, such as Moonraker and You Only Live Twice.

Final question: is it difficult to conduct John's music in concert?

And the answer is absolutely no because the music speaks so clearly and simply that any conductor who doesn't feel the phrase should do another job.

Stephane is now sorry to be a bit late on schedule, so decides to go directy to quoting director Kevin Costner who said Dances with Wolves had two authors, the novel writer Michael Blake and the score composer John Barry.

So he asks John if he feels being a musical screenwriter?

John says he doesn't. The fact is Dances with Wolves and also Out of Africa were stories where the period's music just can't be used for modern audiences. You would be dead in the wall doing that. So he had to use an impressionist filter to catch the period feelings.

Stephane wants to show an extract of the making of DWW where John and Kevin discuss the score.

Then he asks John if he can explain the choice of music elevating spirit rather than plain western music.

John answers going to the spirit of a movie allows to catch what a movie is really about and not just follows what is seen on the screen only, so to add another dimension to the movie.

The conference ends with the scene Looks Like a Suicide from Dances with Wolves.

When exiting, the staff members proposed a side queue for fans to get a signing from John. 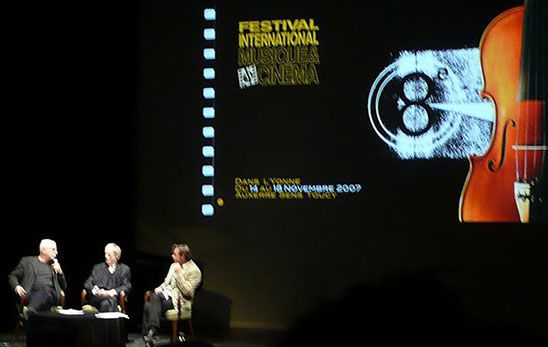 Screen captures from the France 2 news item. below 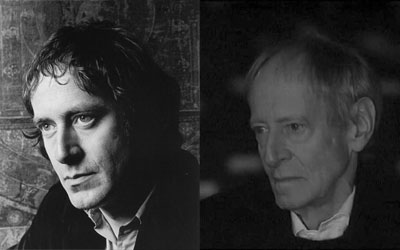