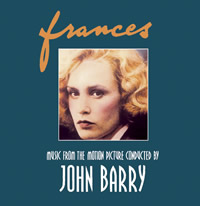 "The wistful, melancholic score for Frances was composed and conducted by five-time Oscar recipient John Barry. Director Graeme Clifford, who believed that his composer of choice was the only person suited for the job, wrote in his original introduction for the 1982 LP release, “I have admired John Barry’s music for many years and had always promised myself that when I made my first picture I would contact John first. And that is what I did. I needed music that was at once romantic and yet underscored the severe emotional stress that pervaded Frances Farmer’s life. Even without the images on the screen, and many months after completing the picture, John’s music still moves me deeply”.

Of particular note to the listener is how Barry’s score reinforces the screenplay, albeit with great subtlety. Never intrusive, but striking nonetheless, are the elegant use of long, sustained chords (a Barry trademark) in the orchestration and an occasional harmonica solo, which the composer informed this writer in 1982, “comments on Frances Farmer’s yearning for things past”. The ascending two-note motif depicting Frances’s inner turmoil, “her cry for help” (Barry, again) intoned by the brass, is of interest too. Barry argued that overuse of the score would call attention to itself.

This is one of Barry’s most noble and haunting works, one which occupies a special place in a notable canon that includes some of the finest scores in the history of the cinema.

The film also boasts an impressive cast; Jessica Lange as the troubled Frances; Kim Stanley as Frances’s mother, Lillian Farmer and playwright-actor Sam Shepherd in the fictionalised role of one Harry York. Lange was nominated for Best Actress by the Motion Picture Academy at the 1982 Academy Awards but she lost to Meryl Streep in Sophie’s Choice."

This album has been re-mastered for Super Audio CD (SACD). This Hybrid SACD may be played on all CD players.

THE COMPETITION HAS NOW ENDED
Here are the answers and winners of the FRANCES competition.

Most people got this all correct so we had a drawing to pick the five lucky winners. They are:

We have informed Hot Records and hopefully you'll all be hearing from them shortly. Commiserations to those who did not win, but hey, it's not too expensive to purchase!!

More in this category: « Don Black and John Barry do want to revisit Brighton Rock King Kong on Channel 4 »
back to top