Americans to be released on CD 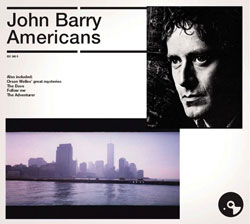 Walking a tightrope between the wide-screen spectacular and the /film/ /d'auteur/, John Barry is a sensitive and sophisticated composer whose most famous scores (say, action movies, the Bond films and "The Persuaders"), were poor camouflage for a more secret form of inspiration whose character was introspective.

In Barry's career, "Americans" stands out clearly. In 1975, Polydor Records gave John Barry the opportunity to freely record a quite personal 12" LP that was his first album outside films, and Barry structured his "Americans" concept: a vast album that reflected his visual and sound-impressions of The United States in six original compositions, including a sumptuous 'Yesternight suite' some eighteen minutes long. "It's like an imaginary soundtrack," says the composer. "Instead of appearing on a screen, the images come up from inside me." Combining some of the best soloists in jazz (Dick Nash, Ronnie Lang, Tony Terran) with a symphony orchestra, "Americans" is a permanent firework display that constitutes a peak in the composer's opus, a work whose swing allows glimpses of an overhanging melancholy tinged with lyrical 'tristesse' and disillusionment. With this first issue of "Americans" on CD, John Barry makes his entrance in the "Ecoutez le cinéma!" series.

More than a simple reissue, it's an event.

More in this category: « Bobby Graham dies The Music of ITC released on CD »
back to top