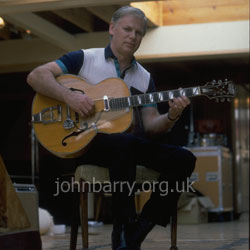 The guitar used to create the most famous film theme in the world, The James Bond Theme, is to be auctioned on 16th December. The Clifford Essex Paragon De Luxe, manufactured around 1939, was purchased by its current owner, guitarist Vic Flick, in 1958.

Originally an acoustic instrument, it was later converted to an electric guitar on being fitted with a DeArmond pick-up, and was frequently used by Flick on his recordings with The John Barry Seven & Orchestra.

Flick used it in June and July of 1962 when the two original recordings of The James Bond Theme were made. The first of these was recorded at CTS Studios, Bayswater, London, and could be heard as the opening theme and throughout the very first Bond film, Dr. No, and the second at Abbey Road Studios, London, for a commercial release on EMI's Columbia label. The latter recording became a big hit for The John Barry Seven & Orchestra.

More in this category: « Omnibus documentary "John Barry-Licence to Thrill" on BBC 4
back to top