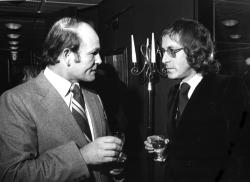 More in this category: « Mike's Murder at BFI in May Review The Lion in Winter 50th Anniversary Blu-Ray »
back to top