I am glad to have this opportunity to express my great admiration and respect for John Barry's music scores.

I first met Mr Barry at C T S Studios, Bayswater, London in December 1971 when he was scoring Sir Carol Reed's "Follow Me". To my mind there were two John Barrys, the Composer and the Conductor, each culminating in musical style. The work starting from subject matter, a film in rough cut after plotting musical cues with the then director and editor, the weeks and sometimes months of isolation when composing for a project, pulling the elements together however diverse, following his instincts being stylistic as only he could do it to "get a fix" from the blank manuscript paper. The work structured with musical intentions, the character of the writing of the music trenchancy and direction of the scoring and cross referencing, building layer upon layer of musical textures creating complex sounds all starting as dots on paper.

As if game-like, notation written with the help of a metronome and a stopwatch, musical colours exchanged from one instrument to another to be given a new life as it fades to be picked up by another musical bridge, to grow and then fade in spacious lyricism using his musicianship and interpretative imagination to bring his written "cues" to fit the confines of time restrictions.

Writing from one chord to another almost key changing. The melody staying in the logical sense but changes are happening like undercurrents taking the music into another mode his perfection of attach and clarity of harmonies and tone.

His feelings and moods, the theme and variations in his music are written structurally for film sequences, a score full of thematic motifs which can still retain its value as music when presented as a separate form. Divorced from the film.

His impact and depth of emotion with feeling not sentimentality for both orchestra and voices, for a non film work (The Beyondness of Things) using his own random thoughts for the function of the music. 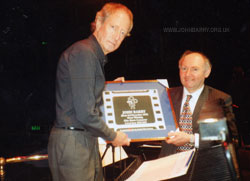 To enrich the music was John Barry the Conductor. Mr. Barry always conducted his own work. Watching Mr Barry conduct in recording sessions, his body swaying, his baton jabbing and coaxing, this was the fun of the game for him. To finally stand in a Studio and conduct his finished score with the detail and subtleties that only he could give his music.

Thank you for the music John.

More in this category: « Terry Walstrom reflects on Bond without Barry Barry's stylistic journey from the 60s to the 90s »
back to top