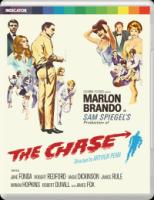 The Chase
25 September 2017
United Kingdom, Powerhouse
Limited Dual Format Edition (UK Blu-ray premiere)
Nick Redman: "It's the same 4k restoration as we released last year - they licensed our commentary and the isolated score that Mike Matessino created from us as well."